Only 38 SS100s left the works in 1927, at £165 for the Pendine model they were out of reach for most people. Only the very rich could contemplate spending this sort of money on a motorcycle even though it offered performance that surpassed almost anything else on the road. Most were equipped with the KTOR engine but a few were fitted with the long stroke JTOR racing engine. Castle forks were by 1927 the standard fitting for the whole range apart from the ‘down market’ 5/15 680 side valve.
The SS80 remained much as the previous years model. The SS80 De Luxe sold for £130 and was fitted with the ‘twin camshaft ’ engine developing a claimed 30bhp, magdyno lighting, ammeter, Karslake prop stand and Klaxet electric horn.
The SS80 Standard was fitted with the single camshaft engine developing just 25bhp and with the same running gear this model sold for £122.10s.
Just 43 SS80s left the works in 1927. Only six are known by the club to have survived.
Three of each type of engine.
It is impossible to say what the original mix of engines was.
The 5/15 continued unchanged as in previous years there are no records available to indicate production numbers. It could be speculated that the maximum annual output of this model was perhaps 40.

The OHV 680 was the sensation of 1927. The miniature SS100 was available at approximately two thirds the price of its big brother 96 guineas,( I guinea was £1. 1shilling). It looked the part and sold 144 in the first full year of production.

Unfortunately, many of the proud new owners tried to wring SS100 performance from the OHV680 and mechanical problems followed. The OHV 680 engine has a basic design weakness at the base of the cylinders that shows itself as a catastrophic detachment of the cylinder barrel from the crankcase.

Having said this the OHV 680 is a very satisfactory bike to ride. It is reasonably light and sensibly ridden shows a good turn of speed.
Perhaps the biggest selling feature was it’s extremely good looks. This was perhaps one of George Brough’s greatest talents. His eye for detail added to his penchant for publicity gave him the sales of his premium products that his competitors could not match.

The 750 Side valve model had been announced and was probably shown at the Motorcycle show late in 1927. Orders for this bike would have been taken but it is not thought that any were delivered

As well as the four production bikes there were other bikes made in 1927 that attracted the publicity that the Brough works thrived on. 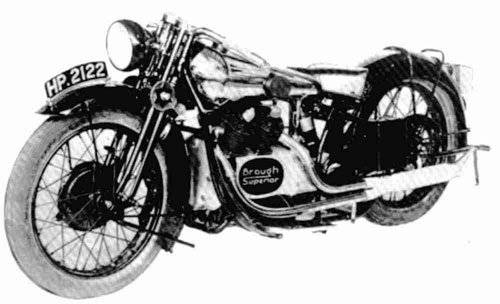 The most radical offering was the V four. This engine was a homegrown 994cc four cylinder side valve engine with a 60 degree included angle. It had coil ignition, a car type clutch and gearbox with integral final sprocket driving a conventional chain drive to the rear wheel. Remarkably the carburation was through a single carburettor feeding into passages cast into the crankcase.

Only one prototype was produced, it was shown at the Motorcycle Show at Olympia in a glass case guarded by Policemen. More publicity but it proved impossible to develop.

Another bike was the unique 500cc single. This was built by George Brough to satisfy one of his customers against his better judgement. The bike was a fairly standard OHV 680 fitted with a 500cc racing JAP engine. This bike survives having been left for 40 years in a hedge at the side of the road following a fatal crash.