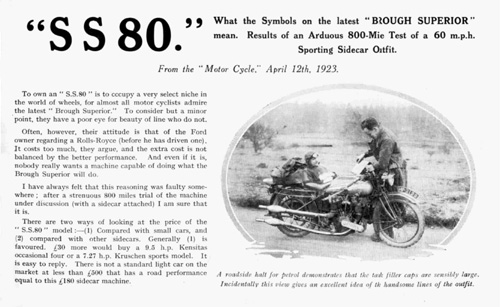 Mk 1 OHV still in production, numbers unknown, see 1920 for details, it is doubtful if very many of this model were made in 1923.

Mk 2 MAG overhead inlet side exhaust. This is effectively the Mk 1 cycle parts with the Swiss MAG engine. Very few were built.
MAG were a well respected manufacturer of proprietary engines supplying many other makers.

Open diamond frame with Webb or Enfield wheels and now the possibility of Brampton, Druid or Montgomery front forks.

The important change for 1923 was that the SS80 now made up the bulk of production. With a total of 87 made. The 1923 Brough catalogue starts the SS80 section with the words ‘To own a SS80 is to occupy a very select niche in the world of wheels’. This was to become George Brough’s main marketing ploy......... Exclusivity ! 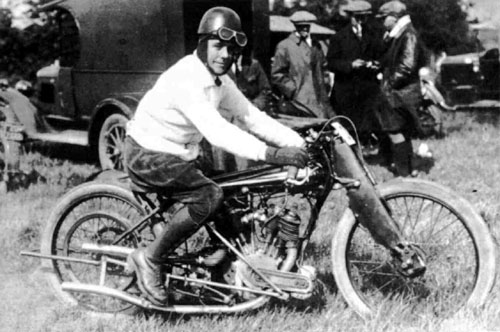 Racing success came with a modified SS80 known as ‘Old Bill’. This bike used a prototype of the ‘four cam’ 8 / 30 engine, this engine was rated 8 horse power but actually produced 30 brake horse power.